Andrew Lazenby, the landowner and potential conservation easement owner of the Fishing Creek Tract, will be leading a walk through the 101-acre property along established trails and moderate terrain on May 21st at 10:00 AM. Andrew graduated from Winthrop University with a degree in biology and is a board member for Katawba Valley Land Trust in Lancaster County. He is uniquely versed in plant life and intimately knows the local history of the Fishing Creek Tract. This walk is perfect for any botany or nature photography enthusiasts! It includes the newly discovered “enslaved peoples” graveyard that is being studied and investigated.

To RSVP, please email us at events@nationfordlandtrust.org or register at Eventbrite: https://www.eventbrite.com/e/may-21st-nature-walk-with-andrew-lazenby-registration-336538093497 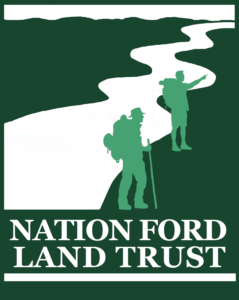 Dr. William “Bill” Rogers, a Winthrop University emerita biology professor, will be directing a small group along the trails at the Anne Springs Close Greenway on May 7th at 9AM to spot any local species of birds for a couple hours. Any participants should go through the Dairy Barn entrance and park in the back of the gravel lot. If you don’t have a Greenway membership, be aware that you will need to pay a $12 day fee ($6 if between 5-12). Birdwatchers are encouraged to bring their own equipment (binoculars are recommended).
To RSVP, email us at events@nationfordlandtrust.org or register here: https://www.eventbrite.com/e/may-7th-bird-watching-with-dr-bill-rogers-registration-320356975337 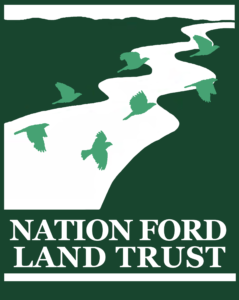 In 2020, Nation Ford Land Trust conserved 1,700 acres in a conservation easement in partnership with York County. The property, named Riverbend Park, borders the Catawba River for over five miles and is on its way to being improved as a public, nature-based recreation preserve. The park itself features rich natural land like primary forests, seasonal wetlands, ponds, enormous pines, and expansive meadows.

To keep up with information regarding the Riverbend Park, check out York County’s dedicated webpage for the project at: https://www.yorkcountygov.com/795/RiverBend-Park. 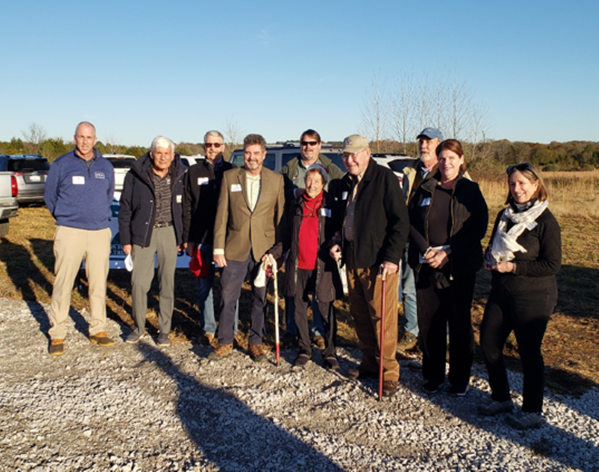 The NFLT 2020 annual meeting was held in conjunction with the Murray White Dedication ceremony. Bernie Ackerman began with opening comments and a review of the previous year’s accomplishments. At the time of the meeting, NFLT had added 4,424 acres in conservation easements. These included the county’s Riverbend project (1,700-acres), the Stuck Family 2020 project (2,700-acres), and the Patrick Property near Nanny’s Mtn. (24 – acres). The meeting continued with the dedication ceremony and the passing of the resolution naming the property in honor of Murray White. Board members are in the photo. 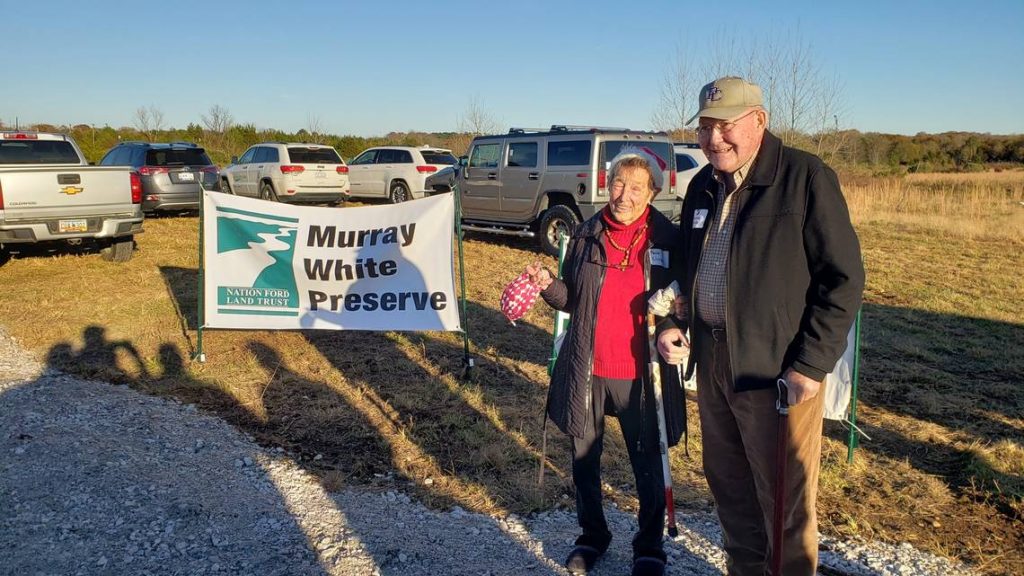 In Dec. 2018, Nation Ford Land Trust received the 158-acre property as a gift from Greenway Waste Solutions (Griffin Brothers, Cornelius, NC) with the intent to place the property into a conservation easement with Catawba Lands Conservancy (CLC).

The Nation Ford Land Trust board decided to name the property the Murray White Preserve after the founding member and long-time chairman of the land trust. Bernie Ackerman, Chairman of NFLT, said, “Murray was the catalyst that brought the original board members together to form the Nation Ford Land Trust.” Anne Springs Close, referring to his conservation efforts, said, “Murray has been at this a long time.”

The intent of the preserve is to make it an income-producing property for the land trust that entails a forestry plan with timber harvesting, a hunt club lease, and a compost facility of 10-20 acres to be used for the City of Rock Hill’s yard waste and operated by Greenway Waste Solutions with NFLT leasing the land to Greenway.

Steve Hamilton, Executive Director of NFLT, said, ”This way, future NFLT boards will have a consistent income stream and occasionally a large bonus of funds from the timber harvesting operation.” 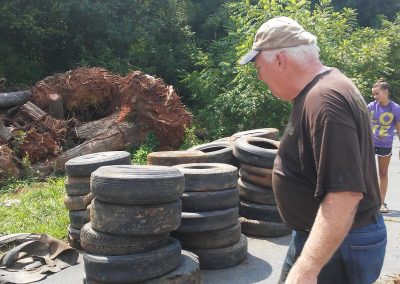 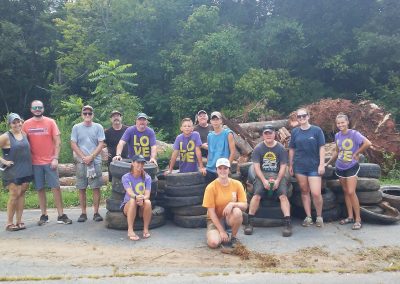 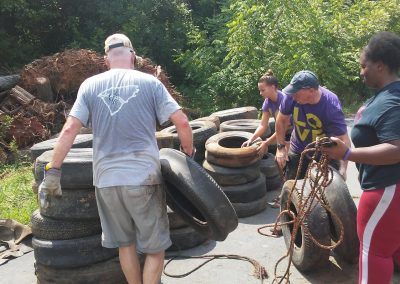 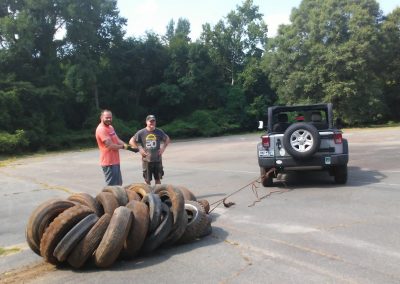 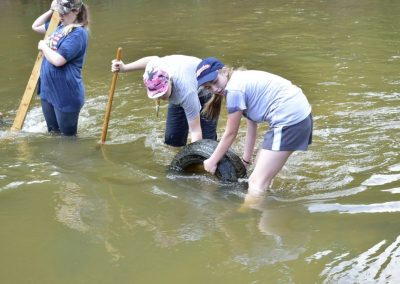 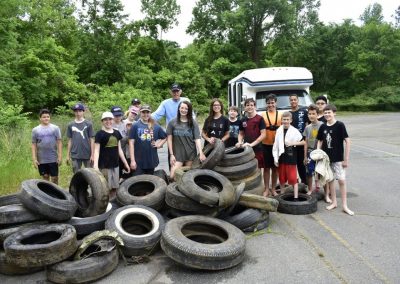 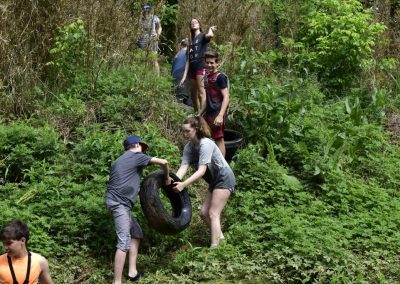 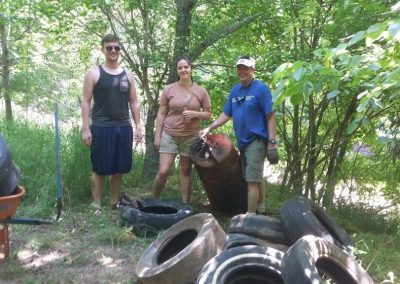 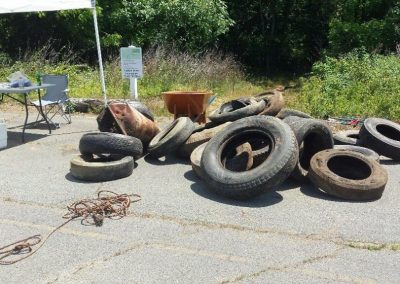 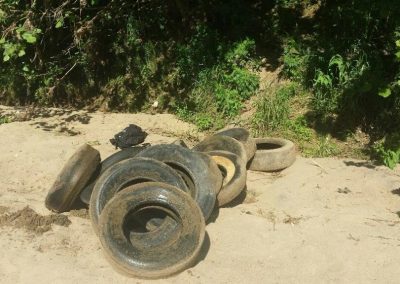 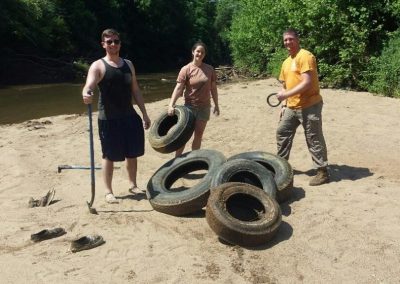 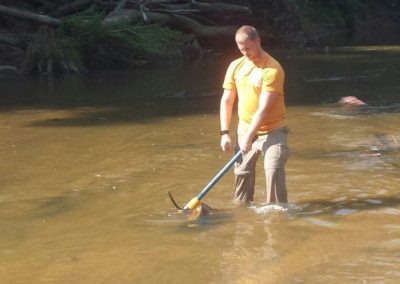 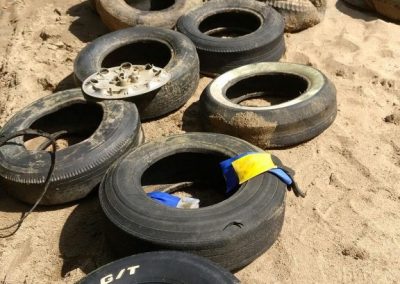 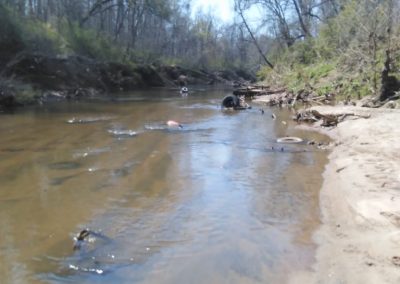 Our next clean up is postponed until further notice. All clean ups are held behind the Antioch International Church, 8400 Regent Parkway, Fort Mill 29715 from 9-12 pm. Please wear shoes that can be worn in water and bring sunscreen, bug spray, a towel and a water bottle. Call the office for more information: 803-547-8140

Preserving Greenspace
for all Generations